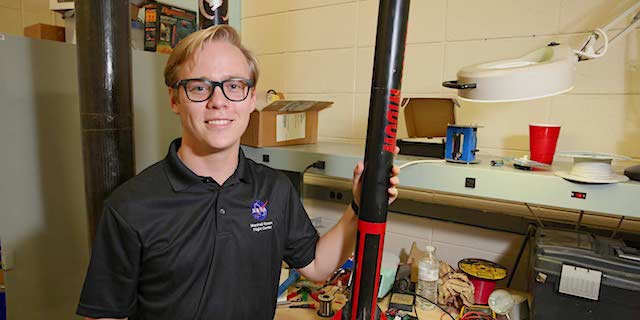 (UAH News) – The University of Alabama in Huntsville senior Davis Hunter is midway through his second internship at NASA’s Marshall Space Flight Center.

in 2016, Hunter won the American Institute of Aeronautics and Astronautics (AIAA) National Student Paper Competition, going on to present his research at the AIAA international conference in Texas later that year. “Getting that experience with the Space Hardware Club and AIAA really helped me get my foot in the door with NASA,” says Hunter, whose first internship with the agency entailed working on a tethered satellite system.

As if his work at NASA doesn’t keep him busy enough, Hunter is also wrapping up his senior design class, in which students spend two semesters designing and building an engineering project of their choice.

We're here to help. Check out our FAQs or contact us.